Congratulations to all the students and staff of St Francis Primary School Victoria, Gozo, on being awarded for the fourth time the GREEN FLAG. Well done and keep it up.

It is an annual appointment for the Maltese Province to meet on the 28th December for a Christmas Gathering.  The get-together took place in our community of Sliema.  We prayed together Vespers followed by a reflection on PowerPoint. Then, Mother Provincial, Sr Claudia Zammit made her annual speech followed by some entertainment organised by the members in Formation.  After we had supper together.

Congratulations to the Students of St Francis School  Victoria

The Water Explorer programme has been re-launched in Malta for the second year running, when Water Explorer teams from various schools embarked on an intriguing quest to raise further awareness about water as an indispensable resource.

The national awards event was hosted by Gozo College Middle School, which was the National Water Explorer Team for 2018.  From challenges tackling the issues of water stress, to others delving deeper into the virtual water debate, they completed several challenges and logged their actions through an interactive online portal.  From the seven participating schools two schools made it to the finals.

Team Franciscans from St Francis Primary School, Victoria and the Misty Team from Gozo College Middle School, distinguished themselves on various fronts by taking a more active and leading role in most of their missions.

The Misty team organised a Fun Walk to raise awareness about climate change and to encourage participants to be more actively involved on a number of Sustainable Development Goals (SDGs) mainly Climate Action, Clean Water and Sanitation.

Several parents and relatives attended for this special occasion including Minister for Gozo Dr Justyne Caruana. The main slogan for this event was – Walk! It’s Carbon Neutral!

The funds collected during the event were donated to the Malta Community Chest Fund and AKVO organisation to build water pumps in developing countries. 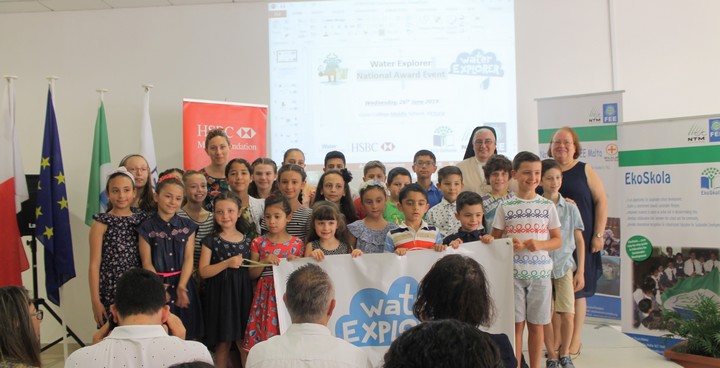 The Franciscans calculated the water footprint of different menus besides making it a point to stop using disposables and consider other alternatives such as stainless straws, re-usable bottles and travel cups.

They also organised book swaps to understand better how many litres of water are used in the production of different books.

One of the most original challenges the Franciscans made, was undoubtedly the parents’ declaration. Parents were asked to make a pledge that they would try to install at least one water saving device in their house.

Water Explorer festivals were also organised by these teams to share good practices as a means of community outreach. Some teams managed to link up with schools from other countries and share their ideas and top water-saving tips.

This fun, action-oriented, international online programme that inspired thousands of students to become Water Explorers consisted of a point system and each action led to points that were awarded for challenges completed on the respective school web pages.

The point system was however more an indication of engagement rather than a measure of the effectiveness of the challenge accomplished. So much so that points gained were not the sole criteria that determined the overall winner from the 7 finalists this morning.

The Franciscans team was announced the winner of a special prize which consists of a number of students and their respective educators going to London to participate in the closing event of the HSBC Water Programme and speak about their actions and ideas, at the Cutty Sark, Greenwich on the 21st of November.

This educational water experience is being sponsored by the Energy and Water Agency. The National Water Explorer title was again won by the Gozo College Middle School – the Misty Team.

This team will be representing Malta in the international online Water Explorer awards event in mid-October. HSBC Malta Foundation also sponsored a €300 cash prize for the winning School.

The Water Explorer programme is internationally coordinated by Global Action Plan and locally managed by Nature Trust – FEE Malta through the Eco-Schools programme.

Celebration of the 50th Anniversary of Religious Profession

Translate »
We use cookies to ensure that we give you the best experience on our website. If you continue to use this site we will assume that you are happy with it.OkNoRead more